Heroin is an opioid drug made from morphine, a natural substance taken from the seed pod of the various opium poppy plants grown in Southeast and Southwest Asia, Mexico, and Colombia. Heroin can be a white or brown powder, or a black sticky substance known as black tar heroin. Other common names for heroin include big H, horse, hell dust, and smack.

How Do People Use Heroin?

Heroin can be consumed in a variety of ways.  People inject heroin, sniff heroin, snort heroin, or smoke heroin. Some people mix heroin with crack cocaine, a practice called speed-balling.

When it comes to smoking heroin, pretty much any form of heroin can be smoked. This involves heating up the drug, which is done either by using a small glass pipe or on aluminum foil, and inhaling the smoke through the pipe or a small straw.

Heroin use in the media is commonly portrayed as being injected.  You see a drug addict with a needle in his or her arm.  However, people smoke heroin and also Snort Heroin. Some ask, How do you snort Heroin?  To snort heroin, you need pure powder form of Heroin, a flat surface, and a straw or rolled-up paper. Even when the drug is not pure enough to snort directly, it can be liquefied and snorted into the nose with the barrel of the syringe.

Lorem Ipsum is simply dummy text of the printing and typesetting industry.

Snorting heroin is thought a safer form of using Heroin, When snorting heroin, the drug is absorbed through the nose and lungs, which is not as fast as smoking the drug or injecting it, which is delivered directly into the bloodstream. It takes approximately five minutes from the time you snort heroin to the time it takes affect. Unfortunately, many people who abuse heroin will eventually turn to smoking or injection it, due to the desire for faster delivery and more intense high.

Shooting heroin, the slang word for injecting heroin is still popular among many heroin users.  Heroin is injected either into the vein (called mainlining or intravenous use) or the muscle.  It can also be injected under the skin, known as skin-popping.

Although smoking and snorting heroin has increased in popularity over the years, injecting heroin is still a preferred method by many addicts.  People inject heroin because the high is more powerful and it occurs more quickly.

What Are The Effects of Heroin?

Heroin enters the brain rapidly and binds to opioid receptors on cells located in many areas, especially those involved in feelings of pain and pleasure and in controlling heart rate, sleeping, and breathing. 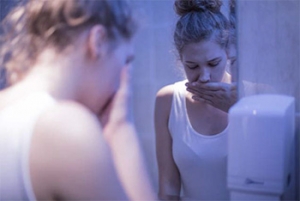 Prescription opioid pain medicines such as OxyContin® and Vicodin® have effects similar to heroin. Research suggests that misuse of these drugs may open the door to heroin use. Nearly 80 percent of Americans using heroin (including those in treatment) reported misusing prescription opioids first.

People who use heroin report feeling a “rush” (a surge of pleasure, or euphoria). However, there are other common effects, including:

People who use heroin over the long term may develop:

People who inject drugs such as heroin are at high risk of contracting the HIV and hepatitis C (HCV) virus. These diseases are transmitted through contact with blood or other bodily fluids, which can occur when sharing needles or other injection drug use equipment. HCV is the most common bloodborne infection in the Unites States. HIV (and less often HCV) can also be contracted during unprotected sex, which drug use makes more likely.

Can a Person Overdose on Heroin? 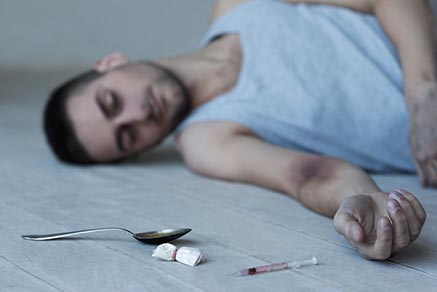 Yes, a person can overdose on heroin. A heroin overdose occurs when a person uses enough of the drug to produce a life-threatening reaction or death. Heroin overdoses have increased in recent years. Heroin is becoming more popular throughout certain cities in the U.S.

When people overdose on heroin, their breathing often slows or stops. This can decrease the amount of oxygen that reaches the brain, a condition called hypoxia. Hypoxia can have short- and long-term mental effects and effects on the nervous system, including coma and permanent brain damage.

How Can a Heroin Overdose Be Treated?

Naloxone is a medicine that can treat an opioid overdose when given right away. It works by rapidly binding to opioid receptors and blocking the effects of heroin and other opioid drugs. Sometimes more than one dose may be needed to help a person start breathing again, which is why it’s important to get the person to an emergency department or a doctor to receive additional support if needed. Read more in the Substance Abuse and Mental Health Services Administration’s Opioid Overdose Prevention Toolkit.

Naloxone is available as an injectable (needle) solution, a handheld auto-injector (EVZIO®), and a nasal spray (NARCAN® Nasal Spray). Friends, family, and others in the community can use the auto-injector and nasal spray versions of naloxone to save someone who is overdosing.

The rising number of opioid overdose deaths has led to an increase in public health efforts to make naloxone available to at-risk persons and their families, as well as first responders and others in the community. Some states have passed laws that allow pharmacists to dispense naloxone without a prescription from a person’s personal doctor.

Heroin is highly addictive. People who regularly use heroin often develop a tolerance, which means that they need higher and/or more frequent doses of the drug to get the desired effects. A substance use disorder (SUD) is when continued use of the drug causes issues, such as health problems and failure to meet responsibilities at work, school, or home. A SUD can range from mild to severe, the most severe form being addiction.

Those who are addicted to heroin and stop using the drug abruptly may have severe withdrawal. Withdrawal symptoms—which can begin as early as a few hours after the drug was last taken—include:

Researchers are studying the long-term effects of opioid addiction on the brain. Studies have shown some loss of the brain’s white matter associated with heroin use, which may affect decision-making, behavior control, and responses to stressful situations.

How is Heroin Addiction Treated?

A range of treatments including medicines and behavioral therapies are effective in helping people stop heroin use. It’s important to match the best treatment approach to meet the particular needs of each individual patient.

Medicines include buprenorphine and methadone. They work by binding to the same opioid receptors in the brain as heroin, but more weakly, reducing cravings and withdrawal symptoms. Another treatment is naltrexone, which blocks opioid receptors and prevents opioid drugs from having an effect.

Points to Remember about Heroin Abuse

If You or a Loved One Have an Heroin Addiction, Get Help Today!